I have always loved water. There is nothing I like more than a walk by the beach or along the canal. You can go every day and it will look different. If I could change anything about where I live in the midlands I would pick it up and put it slap bang next to the beach. 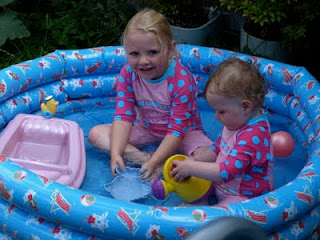 I love to swim, you feel so free in the water, weightless and calm. It was always really important for me that the children learned to swim. I took my oldest daughter as soon as I could when she was a baby. She hadn’t been that keen on a bath at first but quickly grew to love it. As soon as she could walk she would jump in – completely fearless. Sometimes she can be a scardey-cat on land but as soon as she gets in the water she transforms.

I took her to baby swimming lessons at first but after she was a year she began to dislike them. I like that you put the babies under water as I think they get used to it, but the classes are a bit full on – sometimes they just want to play in the water. When she began to cry when we were at a class but would love when I took her in the week I knew I needed to stop.

When she was three I took her to swimming lessons at our local leisure centre and they’ve been brilliant. At the time she was going through a very shy phase and wouldn’t talk to adults she didn’t know – or even those she did at times. So I was a little worried with the lessons as she would be on her own. I read lots of books about swimming and we went together the day before and I showed her where I would sit to watch. There be something about the water because she was so confident and has never looked back.

Now I just need to get her into the sea. She paddles, somewhat reluctantly, but the sound still scares her. Maybe next summer. 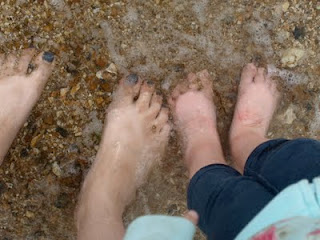 The thing I find the most difficult to come to terms with about having twins is that I can’t take them all swimming on my own. Now my daughter is four I can take her and one twin but I can’t take both. If I only had one baby I would take them during my daughter’s swimming lesson. As it is, I have to rely on dragging another adult along with me. I have taken them swimming a few times – about once a month, and they are starting to love it. They clung on rather desperately to begin with. I know the more they go the braver they will be. Hopefully not too confident though as I just won’t be able to catch them both when they decide to jump in.

Books we love about swimming