I can do anything that’s everything all on my own

Yesterday morning, I heard my four year old daughter moving around upstairs after she had woken up. Normally she either lies in bed shouting for me or comes straight downstairs so I was wondering what she was up to. My first thought was she was messing about but she’s not really a morning person (thank goodness!) and I was pretty surprised she would get up to mischief before she’s eaten any breakfast.
Anyway, she came downstairs fully dressed and ready for the day. Most days it’s a complete battle to get her dressed. She isn’t really bothered about what she wears and would quite happily wear her pajamas if I let her. I’m not sure what gave her the idea to dress herself but she was so proud of herself. I didn’t have the heart to tell her the colours she had chosen were clashing and she was wearing odd socks. We were meeting friends that day and it took all my powers of self control not to tell her to get changed. 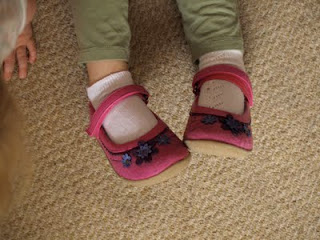 The socks I could cope with, it was the mismatched colours which made me cringe. It’s the one thing I’m really finicky about. Luckily she wants to set out her clothes every night ready for the next day so I can choose things which match. If she does it every day it will be so much easier when she starts school in September. I’m already worrying about how I’ll get her and her sisters ready and up the hill in time for school at 8.45. I am so pleased she is becoming more independent. Although sometimes it’s annoying when I’m trying to show her how to do a new skill and she shouts “I can do it mummy”.
Her little sister is only 14 months and so independent. She seems to have none of the fear of her big sister, who used to cling to my legs and cry if there was a loud noise or a stranger tried to talk to her (or even relative she hadn’t seen for a while). Twin 1 has only been walking well for about two weeks but she’s off. She will go anywhere: into the road, around and about in anyone’s house, in cupboards and up the slide. What is most worrying is she will happily go off with anyone. I am definitely digging the reigns out tomorrow. It’s going to be more stressful for me, and I need to get into the mode that she will be off out of the door as soon as I put her down, but it’s so much more fun than having to prise her off you every time you go somewhere new.
I’ve had to be very independent this week. Hubby is in the middle of a 15 day stretch at work without a break. I like to know I can cope on my own and keep some semblance of order to our lives. Today was a particularly big challenge as the twins had their injections. It’s never the best of days with one child but it’s so hard with two. I did plan to do it when we were both there but got the booking process muddled and so ended up on a day when I had to take them by myself. I could have asked someone else to come with me, but to be honest it doesn’t end up being much help. If they’re upset they either want to be with me or their dad so I would still end up with them both crying and desperately trying to get to me.
It wasn’t my favourite hour of the week. I only checked one twin in so we had a bit of a wait in the nurses room, while the girls tried to go into cupboards and threw raisons all over the floor. The injections themselves were pretty awful, but they calmed down fairly quickly. The nurse was super, she couldn’t have been more reassuring, she actually helped me take the pram into the waiting room as my arms were full of unhappy babies. It gives me confidence every time we face one of these hurdles, even if it doesn’t always go according to plan.
The best thing is – no more injections until the twins are 4.

Ladies – it ain’t easy being independent!