Moon dough was on my daughter’s birthday list this year. When I piled up all her presents there was just too much so I didn’t buy her any. This was partly because we already have a large collection of play doh and I wasn’t sure if there was any point in having two similar products. However, after hearing good reviews from friends we both wanted to try it, so when the opportunity came to review a set I jumped at it. 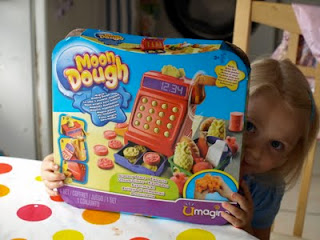 The box was sitting on the table all morning but we had to wait until the twins were asleep. So by the time we started my daughter was very excited. It didn’t disappoint. There is a lot packed into a relatively small box. I liked that it didn’t waste packaging. The moon dough comes in packets. There is a distinctive, though not unpleasant smell as you unpack it. The dough is great fun to play with. I thought it would be grainy like sand but it has a smooth silky texture.

After playing with it for a few minutes and moulding it into a ball I was a little disappointed as I couldn’t make anything out of it. It didn’t seem to encourage creativity as you could only use the moulds provided to make things. However, I soon realised this is not really an art product. It is more for role play.

The set I was sent is a grocery. You can make food using the moon dough presses. This was quite tricky for my four year old at first but she soon got the hang of it. The best thing about using the moulds was that the end product looks really good. Usually when my daughter makes something she’s a little bit disappointed when it doesn’t turn out the way she expects.

The only thing you have to assemble is the till. This part was almost magical. The first time my daughter made a coin she was thrilled. The handle is difficult to turn at first and she thought it wasn’t working so when she saw she had made a perfect coin she was really excited. The next ten minutes or so were spent happily minting her own currency. After that we spent a lovely hour role playing shops and making food using the moulds. I was pleased because we could even have a bit of sneaky maths practice as well.

It also passed the independence test. I could go off and leave my daughter happily preparing her shop for the next day’s trade while I did the washing up and made a cup of tea. The rest of the day she nagged us to play again so this toy was a definite hit. Hubby wasn’t very happy because some of the moon dough ended up on the carpet but it swept up easily without leaving a mark. You do have to be careful where you use it, it needs a hard surface and you need to make sure anything you drop is swept up immediately but I find that the case with all arts and crafts activities.

The main claim of the manufacturers was that moon dough doesn’t dry out and this is certainly true so far. I’m really pleasantly surprised by this product. It is different from other clay products and serves a different purpose. I would consider buying refills of different colours or different moulds.

Disclaimer: I was sent a Moon dough set to review. The views expressed here are my own.