Well I’m not going to be writing about today being the best day I’ve ever spent with my family. It’s definitely not the best day – it’s not even bad enough to make the top ten worst days. Just one of those days when it has been a long, hard slog. Sometimes parenting is the best job in the world. They look up at you and say mamma for the first time or dance around excitedly when they see you. They bring home a great report or suddenly do that thing you’ve been trying to teach them to do for months. It’s wonderful then. The best job in the world.

Sometimes, though, it’s just hard work. Take today for example. I am currently writing this sitting on the floor outside my daughter’s bedroom, listening to her shouting at the top of her lungs: “mummy, I’ve calmed down, open the door!” Twin one is also screaming, upset by the noise. The day didn’t start well. My eldest was up at four. She sneaked into our bed and I would have let her sleep with us. We’d already been up for a couple of hours with one of the twins, who had dropped her muslin cloths and so couldn’t go to sleep. However, she kept banging the bed, and wriggling, stroking my face and that sort of thing, anything except go to sleep, so after an hour I tried to put her back to bed. Normally she’s a good sleeper, but last night it just wasn’t happening. By six o clock she had woken up one of her sisters and as we had to get up at seven for school we just got up. Four hours sleep means one very grumpy mummy, and very grumpy girls. I knew the evening wouldn’t go well when I went to pick her up from school and she was crying before we got through the school gates.

It’s always herder when I’m on my own for the evening. Getting three children fed and bathed is hard when they’re all in a good mood. When they’re all tetchy it’s a real struggle. It wasn’t too bad – for a while. They all had their dinner and were momentarily cheerier. They all tried to sit on my lap after dinner which made drinking a hot cup of tea pretty tricky. It was at bathtime when everything started to fall apart. The twins were in the bath and I made the mistake of thinking this was going rather well, and perhaps I should write a blog post about how to bath two toddlers when you’re on your own. Of course pride comes before a fall. I got them out, dried them off and put a nappy on one, then chased the other one around the rooms upstairs and put her on the bed only to find, yes you’ve guessed it – she had poo on her feet. She wasn’t too happy going back in the bath and I wasn’t happy I needed to change the otherwise clean sheets and go round the rooms poop hunting. I tried to bath their sister but that was a mistake as she had a plaster on her knee, and because she was so tired from being up most the night, just howled through getting dressed and sobbed through her stories.

So there you go. Not the best of days. Yours was hopefully a bit better. I know I could ring someone up and moan about my bad evening. They would probably be sympathetic, but it’s not something I would do. I like to be positive if I can, rather than dwell on the bad things. So without blogging I would be feeling lonely and trapped and out of control. With blogging I have a lifeline. A community to share these things with. You might not be interested in my bad day, in which case you don’t need to read about it. But it does help to write it down. Now I’ve finished this, all has gone quiet, I’ve tucked my daughter into bed with a big hug, which was very lovely until she said “you’re squashing my neck, mummy.” So blogging made me calmer, and hopefully a better mummy. That has to be the best thing that has happened as a result of blogging, right? 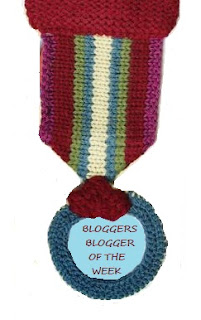 Oh and I also won bloggers’ favourite blogger award this week over on Love New Blogs. Since becoming a SAHM I’ve felt a bit like Lisa Simpson, shouting “Oh, I’m good, good good and oh so smart! Grade me” when she can’t go to school for a week. So to be given a medal, even a metaphorical one, has made my day.