Happy blogversary to me!

This week my baby is a year. No, no, no – not any of my real life human children – my other baby – this blog. I started blogging a year ago on Saturday. I never thought I would make it past a month – let alone a year.

I moved my blog address two months ago, and when I did a few posts didn’t move over properly. I got fed up trying to work out how to do it so thought it might be a good idea to repost some of the best ones and see how much my life has changed in the last year and how I’ve (hopefully) improved as a blogger. Ok, I’m just being lazy really but it’s still a good idea.

I have already reposted my first post so this is my second.

Surviving the first year with twins

My twin girls turned one last month. It was lovely to celebrate their first birthday but I felt the more important occasion was us getting through the first year. I tried really hard not to wish the time away. Everyone always says you will look back and wish they were babies again. It’s just the first few months are so very hard. Everything is coloured by extreme tiredness. There was a point in the day, usually about four or five in the evening, where my words would become slurred and drunken and everything felt unreal. It was completely down to exhaustion. Of course it’s tiring having toddlers as well – especially two of them – but the rewards are greater. Babies are beautiful and all, and the occasional gummy smile is sweet – but most of the time it’s just hard, relentless, thankless graft.

Most people I talk to say some variation of “I bet it’s hard having twins” or “how do you cope?” No one means it – but sometimes it feels as if people treat twins as a calamity. When I was pregnant I was shocked a colleague came up to me and said “oh God, twins! How awful, I would hate to have twins!” I suppose I used to think the same – though I hope I was more tactful. But how do you cope with anything? You just try to get through each day as best as you can and count every success – no matter how little.

Of course it was a shock finding out we were expecting twins. I had always said I wanted two children, and couldn’t understand why anyone would want a larger family. I was perfectly content having just me and my brother growing up, and I suppose I wanted to replicate that. I had a really happy childhood with loads of attention, even when my dad was away at sea in the navy, and my mum was on her own.

So now a year on and my life is definitely not as I envisaged. Childcare is so expensive it makes no financial sense to go back to work at the moment. It was a tough year in ways I couldn’t have imagined. Trying to tandam feed two constantly hungry babies; deciding which baby to pick up when both are screaming, getting all three dressed and out of the house ready for an outing, getting back into the house after an outing when all are tired and grumpy; and in the last month both babies coming down with chicken pox a week apart. If I am honest I would say we’re only meant to have one baby at a time. They’re too fragile in the early days and are so demanding. I feel guilty that I haven’t been able to give them the one-to-one time their sister thrived on. If there was only one, I would be back at work, if only part time. We wouldn’t have needed a new car, two highchairs and two cotbeds or new cumbersome pram that won’t fit through doors.

Our life would be so much easier with only one baby.

And yet. If my body had been less greedy and stuck to the plan I would only have one. It’s impossible and pointless to imagine. Although they don’t have my undivided attention, perhaps they will have something more special. I saw it when they were tiny, sleeping cuddled up together holding hands. They squeal with delight when they see the other and play follow my leader around the house, enthusiastically patting each other over the head if they get close. So I decorated two cakes (with red smarties for the chicken pox), wrapped two presents, made two cards with Molly and sang happy birthday twice. It wasn’t what I planned but I wouldn’t have it any other way. 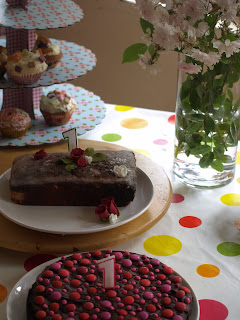