Today one of the twins is poorly, so I’m going to give myself a nice rest and post an old favourite from my blog before I moved to the current address. This post was in response to a survey which stated that the average new parents spent  £9000 on their baby in the first year. I wrote it when the twins had just turned one, around a year ago. 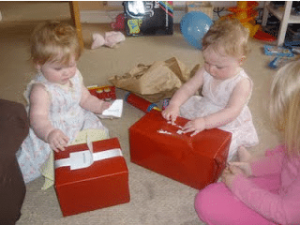 If the survey is true then my twins would have cost me £18,000. The thought makes me feel sick. With only one wage we do not have that much to spend. We kept everything from my daughter, expecting to use it again, however, as we had twins some things weren’t suitable. I know it doesn’t really matter if things don’t match but it’s nice when they do. The biggest expense has been getting a 7 seater car.

Also I would have returned to work for two days a week if we’d only had one baby, so our income would be more to start with. Having two children the same age is just too expensive from a childcare point of view. Nurseries and childminders can only offer a ten percent discount. For me that just isn’t enough to make working practical.

So a small breakdown of what we spent would be:

So I have probably spent around £9000 for the two of them. See they really were BOGOF babies.

The thing is: you can’t put a price on a baby – or two for that matter.

As that Barclaycard ad says: