While watching Mr Maker last week we saw a toy which had long arms made of elastic. The idea was too good to use and as we have been reviewing Little Miss books for MiniBookworms the Mr Men series was top of my mind. What better character to make with long bendy arms than Mr Tickle. 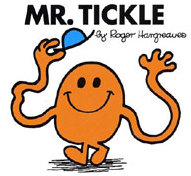 Mr Tickle has always been one of my favourite Mr men characters. It is the first story in the series and was inspired by Roger Hargreaves son Adam asking what a tickle looks like.

We did this as an outside craft, as we had a tiny bit of good weather. As usual it was a bit of a spur of the moment decision and I didn’t get round to putting down newspaper. Oh well – too late to worry about it now!

I cut two bits of card from a cardboard box into a Mr Tickle shape. I stuck some large elastic (I used about four meters) for the arms and legs. I stuck the two pieces of card together, with the elastic taped down with masking tape in the middle. Then Molly painted the outside orange and blue for the hat.

When it was dry I drew the face and outline with permanent marker. If I get a bit more time I want to make some hands and feet to add to the end of the elastic to look more realistic – well as realistic as a big orange man with gigantic tickling arms can be!

Once Mr Tickle is made there is only one thing to do: run around tickling everyone!