Summer has ended. Yes I know, it’s a huge let down, but it’s over – all we can do is put away our sun cream and summer dresses and start looking forward to Christmas. I am starting to slowly pack away the toys in the garden and leave everything tidy. the children will still have the play house and trampoline for any nice days but we won’t get as much use out of the smaller toys.

Last thing at night I hid lots of pretend treasure from their pirate treasure chest in the sand pit. I left the empty treasure box by the back door with a note inside. I have to admit I didn’t spend long writing the note and making it more pirate-ified, but it did the trick. I used sight words so that Molly could read it on her own, as I always look for opportunities to get her to read.

To Molly, Charlotte and Rose,
My coins are gone! Help me find them. Look at the map.
Love from,
Pirate Squid-bones

Then I drew a very simple map of the garden with an x at the sandpit. Molly was pretty confused and excited when she found the box. She asked lots of questions about how the pirate had got in the house and where his boat was. She didn’t ask why he wrote with my handwriting, or whether pirates would sign their notes with “love from” or why he couldn’t find his treasure when it was only a couple of meters away from the empty treasure box.

Anyway Molly soon rounded up her little helpers and they had found the sandpit using the map. After that she lost interest. The twins spent ages digging the treasure out of the sandpit. they were especially taken with all the gold rings.

When it was time to come inside I had laid out a sensory bin for them to play with, containing the remainder of the pirate treasure. Inside the treasure box are lots of pretend gold coins and jewellery for party favours. There was also a pirate eye patch and a toy mirror. I put it in a large tray and left a few small containers for sorting. The twins enjoyed exploring and sorting the objects for the nest couple of days when they need a quiet time.

To make a treasure chest from a cardboard box look here! 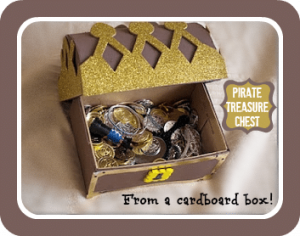 I am linking to Get Crafty, Tuesday Tots, Tiptoe Through Tuesday, Let’s Play, Science Sparks