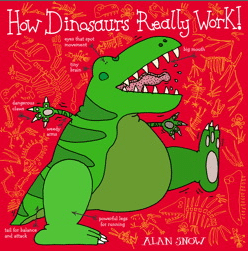 Do you  know the answer to these dinosaur questions?

How Brainy was a Brontosaurus?

How much could a T-Rex eat in one bite?

Could you beat a dinosaur in a race?

What colour were the dinosaurs really?

No? Well I didn’t either. Luckily this fun book has the answers. It’s aimed at 4+ year olds and would be brilliant for a young dinosaur  enthusiast who wants to learn a little more about their favourite prehistoric creatures.

The facts are presented in a clear, easy to digest manner. The illustrations are bold and colourful with lots of interesting details to capture children’s imaginations. There are facts and jokes on every page.

I love the layout of the books. Each page has a large, colourful dinosaur in the middle and a thick colourful border around the outside filled with fun facts and jokes about dinosaurs. It reminded me of the Horrible History series, in that it makes learning fun and concentrates on the facts children are really interested in.

Molly loved the book, especially the illustrations. Some of the facts went a bit above her head, and I think it is a book we would need to come back to when she was a bit older. She kept asking whether dinosaurs were real and if they were still around. For a younger child the dinosaurs are presented in a friendly, humorous way – so this isn’t a book which will give them nightmares. We had one small difficulty with the book, which another child wouldn’t have, especially an older child. Molly was a bit confused by the little dinosaurs inside the bog dinosaur. An older child would understand this is a joke but she kept wondering why dinosaurs have little dinosaurs inside them.

This book is ideal for any dinosaur mad children. It will get them laughing as they are learning – which is a great accomplishment for any book.