Do you find yourself constantly saying no to your kids? I know I do. Everything they ask for is a no – not today, later, I’m busy, not now, no way, not on your nelly, are you kidding, over my dead body, no, no no, no, NO! Life is busy and young children just don’t get that their every whim can’t be catered for there and then. I don’t think it’s a bad thing. We all need to learn we aren’t the centre of the Universe.

I do think children should sometimes be allowed to win. I don’t mean every time – they would end up spoilt. But I know what it’s like when I’ve had a week where everything has gone wrong, and I’ve not been able to do what I want – actually most weeks are like that! It’s disheartening and depressing and you start to feel like you have no control whatsoever over your life. Life for children can become so regimented. From the moment they get up to when they are tucked in their beds they get very few opportunities to choose what they want to do – especially once they leave the early years at school. Again, it’s not a bad thing – but a little break from routine every now and then is a good thing.

This last couple of weeks have been tough. I’ve been feeling stressed and when I feel stressed I get tetchy and grumpy and lose all my patience. On Saturday it felt like the whole day was one big NO. So we all really needed a fun day. A day to do whatever we wanted. A Yes Day! 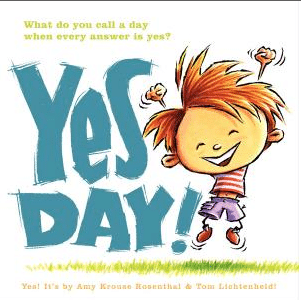 First we read the book by Amy Krouse Rosenthal  called Yes Day It is such a fun book with simple attractive pictures. It has a straightforward narrative of all the events of the day – with the child asking if they can do something a little wacky and then a picture showing them doing it. I like the fact there is just a picture and not the word yes repeated every time as it makes it more powerful. As soon as we read it Molly asked “Can we have a yes day?”

Now I know what you’re probably thinking: there is no way I want my children picking the activities all day – it will be a complete disaster. I made sure I kept the power of veto and had a rule that it couldn’t be dangerous or expensive. I think with older children you would also need to give them a budget – I did this at the soft play by giving Molly five-pound coins to spend and that was all. As she is still quite young it was also easy to steer her towards activities which were realistic. In fact she found it quite hard to think what she would like to do and needed quite a lot of steering!

The night before we drew up a sort of contract with what she wanted to do. This formed the basis of our activities. I had to sneak in a bit of book learning and this was a great activity because Molly is learning about writing lists in literacy!

Here is a pdf of a blank version of our Yes day Agreement – in case you want to print it yourself!

1. Have pizza for breakfast.

2. Play with her cousins.

3. Go to the soft play centre.

6. Have lunch at Mcdonalds.

As you can see there is nothing too outrageous. Most of her list is either ideas from the book or her favourite activities. The only one I really don’t like is the fake tattoo one.

Along the way she also wanted lots and lots of drinks, stayed in her pyjamas until the last possible moment, watched a bit too much telly in the morning, walked to the soft play area, met with a friend and her cousins, went on lots of £1 rides, rode on the back of the pram – something I don’t normally let her do as it is too heavy, rolled down the hill in the park, and had breakfast for dinner.

I said the yes day was over at eight, mainly because it was a Sunday night and she can often mess around at bed time.

So was the day a success? Yes! Ok – I’ll admit it was not the most healthy day food wise – but we can make up for that over the rest of the week. It was healthy, exercise wise though as we spent the whole day running about and walking. It wasn’t too expensive – probably £20 in all. It was good to meet up with other people, I can get a bit anti social at times and it definitely made a day when I was on my own with the kids easier. We only had one disaster with one of the twins having an accident so  her trouser were wet. Luckily we managed to rustle up a spare pair so we could go to the park.

During the day I felt much more relaxed than normal. It was lovely to be saying yes for a change and not a whole series of now. Molly was actually more cooperative than normal – probably because she felt like she was in control. During the day there was lots of giggling and cuddles and whispered I love yous.

In fact I couldn’t ask for a better day!

Next I’m planning a Yes Day with me in charge! This is how it would look:

2. Eating my breakfast while reading the paper. In peace.

3. having a shower, undisturbed.

4. Doing something fun with the girls – like the park or farm.

5. Taking them out for lunch.

6. Having some quiet time to read a book.

7. No one using a whiny voice or having a tantrum – all day!

8. Coming home to find the house tidy and clean.

9. Going out for dinner and a movie with the hubby.

10. Watching a couple of episodes of a box set.

So will we have a yes day again? 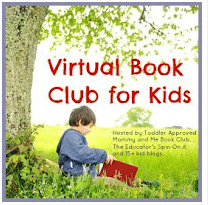 This post is part of a blog Hop for the Virtual Book Club for Kids.

Here are the other blogs taking part:

If you have posted about any books by Amy Krouse Rosenthal then link then up here.