Now the girls are nearly three they are really into role playing games. The love imaginative play and taking different characters and acting them out. It’s nice to have a few games for kids to play on their own and a few props can really facilitate their ideas.

The girls really love sending and receiving letters and so I thought it would be nice to make them a mini post office. It also provides lots of opportunities for reading and writing and the skill I am working on with them at the moment which is to recognise their name – in readiness for when they start nursery in September.

The post office is really simple to get ready. I lay out some writing equipment, paper, pencils, stickers and some envelopes with labels on with the girls names on. I have made a lot of sticky labels all with the same picture for each child – so they recognise the picture first with the word and a number too. I also put a letter stamp to go with each name. There is a postman costume a post box and some letterboxes with each name on.

The girls were both very keen to write. I had a few pretty bits of stationary for them too. They liked using their own letter stamps to show their name at the bottom of the letter. This is very much play writing – but it practices so many pre-writing skills: understanding why writing is important, that print has meaning and pencil control.

It’s interesting watching them as Rose is definitely favouring her left hand. She is also a bit more reluctant to write and draw and has more difficulty making marks. She prefers to use a felt tip pen as it’s easier to draw than a pencil and gets frustrated easily when she can’t do it. This activity was just too tempting and she really enjoyed it.

Once the letters were written they put them in the post box. This is a very simple craft we made a few weeks ago. It is a cylinder which had crisps in which we painted red and gold and I added some post information on with a permanent marker.

After that the girls took it in turns to be the postman and deliver the letters to the right letterboxes. The letterboxes are very simple – they are a cereal box with a flap cut in to it which I’ve decorated with some pretty wrapping paper. There is a name on each one so the postman can post the right letter.

The only problem is that the postman costume is getting a little small. I think they would be just as happy with a big bag to put the letters in.

I’m interested to see how the game develops at the weekend when they can play with their big sister.It has already been built into one of their favourite games – birthday parties. I think I will make a few parcels and presents for the postman to deliver. 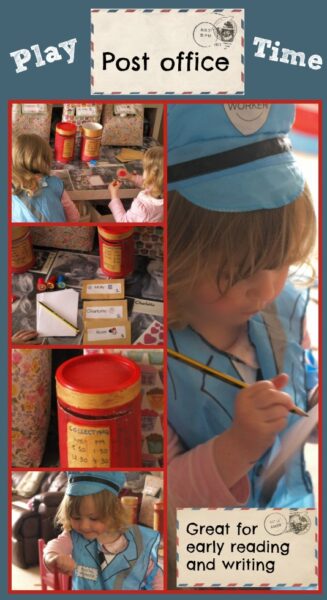 100 Days of Play Blog Hop
Sharing simple ideas on how to connect with your children through
play!
New ideas shared each day from 4/1 – 7/20.
Help us
spread the word!
Grab a Button to Share on your Blog!