Time For Your Check Up

It is good to see a TV show for children with a strong female role model. Doc McStuffins while a fun show is definitely aspirational. ALthough the Doc isn’t a real doctor the fact she is encouraging young girls to act out being a doctor rather than a Princess has to be a good thing. Also the show depicts the mother as being a doctor. Kids don’t care about that of course, they just want a fun show they will enjoy watching and my girls definitely do. 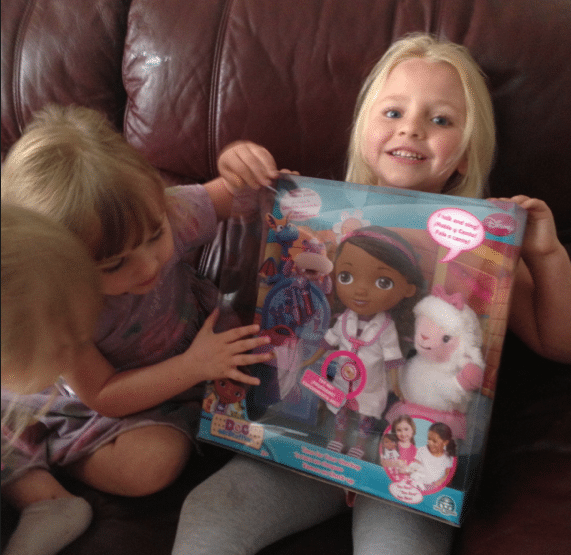 This is a great toy when you have more than one child. It is really fun to play together. The girls had a whole series of poorly toys which Doc McStuffins had to make better using her tool kit.

The dolls are interactive and sing the cute songs from the series and say some of the phrases. There is also a non talking version if you don’t like toys with batteries.

I love how the girls play with this toy. They spent about two hours when it arrived playing together. Sometimes I find interactive toys get in the way of children playing. It stops them from having their own games and ideas. This one led to their own game. Soon they were all poorly and Doc McStuffins was making them better.

The Doc McStuffins toys costs £40. Considering the fact you get 2 dolls which both talk I think this is reasonable. I think the option of having non interactive dolls for around £10 is also good and I would probably choose those myself.  I think this is going to be a really popular toy and there are already reports of it selling out in the US.

Disclaimer:We were sent the toy for the purposes of this review.