I love play dough as a learning resource. I wanted to make something Halloween themed to continue our theme of learning numbers and 5 little Pumpkins seemed very apt. It’s not a song I’m that familiar with but there are lots of versions on Youtube so it is very easy to pick up.

Rosie didn’t want to go out on Sunday and I was in the same sort of mood. She said she just wanted to stay at home and play and so it seemed like a good opportunity to make some play dough.

We mixed up two colours – orange using orange food colouring, gold glitter and pumpkin pie spices and green with green food colouring and glitter. I added the numbers and a bowl of googly eyes as well as a blunt knife to make the mouths. I also brought out the number candles which are really great for using with play dough number work.

Normally I start with the free play but Rose wanted me to make some pumpkins for her to play with. I  rolled the orange into five balls and added a little green top. She put the eyes on – another great bit of counting and I added a zig zag mouth. Then we matched the candle numbers and said the rhyme. In case you don’t know it here are the words:

Rose was rather taken with her pumpkins and continued to play with them while i tidied up and put the dinner on. She began playing schools with them. One pumpkin was very naughty and kept taking the stalk off the others.

This is when she had a great idea and decided to use pipe cleaners to make feet for the pumpkins.

For more learning ideas made sure you are following my Fun Education Ideas Pinterest board. 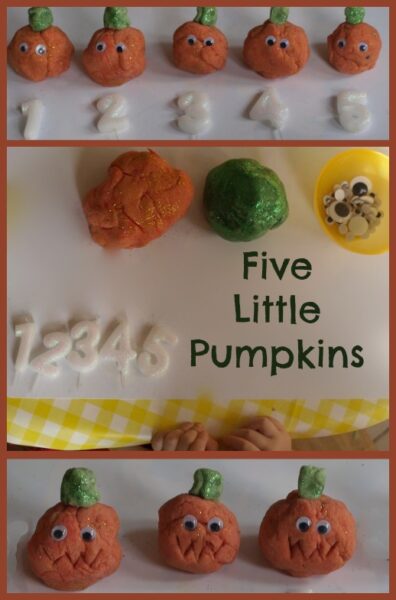 Also come back every Monday to find more creative ideas for learning through play.