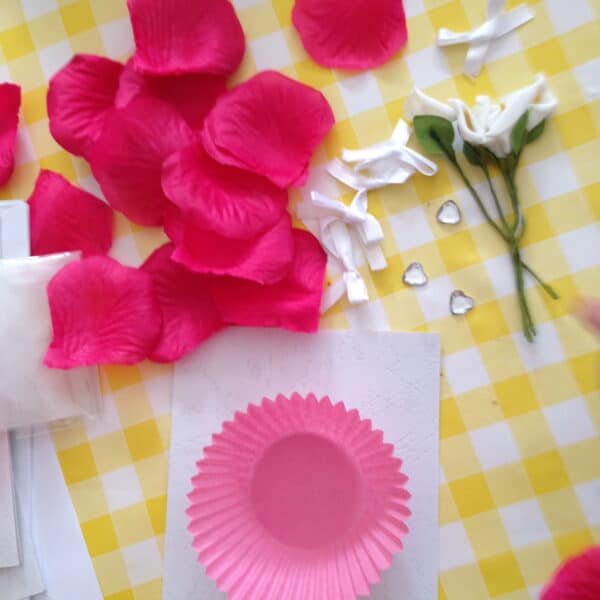 The girls wanted to make some flower cards for Mother’s Day. We had lots of petals eft over from the wedding sensory box we made a couple of weeks ago and I thought they would be great to craft with.

Now the twins are older I don’t need to direct them as much and in fact we get better results if I let them make whatever they want. I set out lots of pretty flowery craft materials and let them make a card how they wanted.

Charlotte had a very clear idea of what she wanted to do and it was most like I had in my mind. She flattened the cupcake case and then used a lot of glue to stick the petals around the edge. She filled the middle with gems and used the ribbon as a stem. She made two cards and they both looked really lovely.

Rose had her own ideas. She didn’t want to make a card but wanted to do a picture. She used two cupcake cases to make the petals and then stuck one of the pretend petals in the middle. She didn’t want to use ribbon for the stem but found some glitter from somewhere (still no idea where as there wasn’t glitter out).

When Mother’s day came i saw where she had got the idea for using two cupcake cases as it was just like the lovely present she had made for me at Nursery.

I really love what they made. It is a basket of flowers using their handprints for the stem and mini cupcake cases for the flowers. The plastic cup it sits in is decorated in pretty colours and the twins have cut around a heart saying Happy Mother’s day. It is a brilliant use of fine motor skills.

The cards look really lovely on the mantlepiece and just show that there are a range of cards for preschoolers to make.

For some more Mother’s Day cards for preschoolers you could try:

Colour Your Own cards