It’s been such a disappointment having no snow this year. The girls love bringing snow inside and playing with it. We always put some in the freezer so that there is more to play with when the snow has gone.

Fake snow is a really great filler for a sensory bin. It works in the middle of summer as it can be cold so it is a good way to cool down on a hot day.

Sometimes called Magic Snow, this really is fascinating stuff. You add water to it and then watch as it expands.

Magic snow is a lovely material for a sensory bin because it is slightly cold and wet to the touch. The twins were 2.5 in these pictures and you can tell how much fun they had just playing with the snow and feeling it. I added a few fake trees and a little post box to make a small world for them and they had spoons to scoop it up.

I love how the twins play together when they have a sensory bin. I set them up with a small bin each and the same materials to use. They still end up sharing and swapping with each other – but at least they don’t fight over the same thing.

Fake snow adds a wonderful element to small world play. A sensory bin just needs a few houses and some small world characters such as Playmobil and children can play for hours. This Winter small world  started as a sensory bin and ended up taking the whole of the kitchen table.

As part of the sensory bin we also had some frozen ice. Ice works well as a bin material of its own.

The best part of having fake snow in your small world is that you can make it snow on your characters.

Play dough adds another element to a fake snow sensory bin. A tray with some white play dough and some bits and pieces to make snowmen is invitation enough to build snowmen.

You can also mix some of the glitter and fake snow with the play dough to make it more realistic. The snowmen look so good in the fake snow and they can set up little scenes for them.

This is the girls current favourite sensory bin. They have the dolls from Disney Frozen and two different bins. One is the ice bin we used in our Winter small world.

The girls particularly like playing with Olaf in that small world.

The second bin is just a bin filled with fake snow, in this case a mix of glitter and packing noodles, the frozen characters and some small trees. Great for acting out all your favourite scenes from the movie.

Elf on a Shelf Sensory Bin

This one is definitely a Christmas activity. You can make a sensory bin for your elf to play in so he doesn’t miss the North Pole. 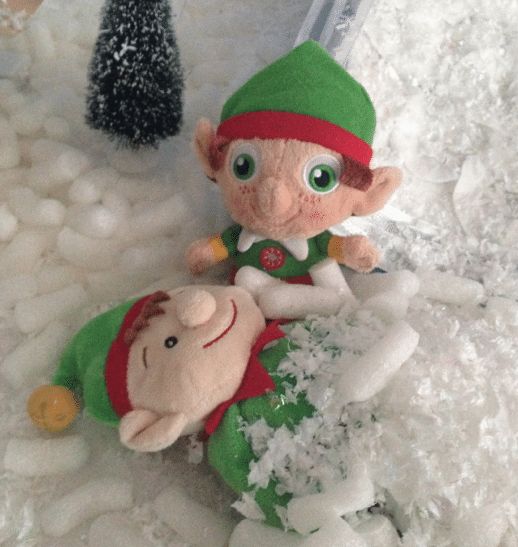 To find more filler ideas make sure you visit the other hosts. 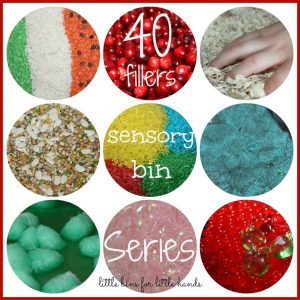 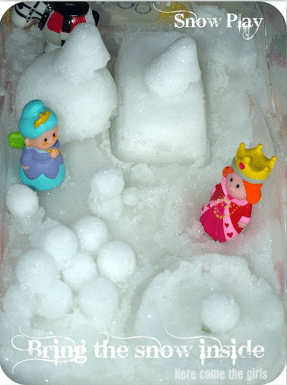 5 Ways to Play With Real Snow

If you have any snow sensory bins then link them here: