There was only one possible choice for our Halloween pumpkin this year. The girls’ favourite character from any film was the loveable Olaf from Disney’s Frozen and he lends himself perfectly to a pumpkin creation. I’m pretty sure there are other Olaf pumpkins around, but I haven’t seen any yet and I haven’t wanted to look to see what other ideas are out there.

The first step was to paint our pumpkins. I used a fast drying enamel spray. I painted two coats with different sprays, white and then glitter.

I actually liked the white enamel spray on its own. It looked really shiny.

The glitter layer gives it a really snowy feel.

We left the pumpkins overnight to dry. Today I got together the other materials.

I was going to make googly eyes using bottle caps and plastic pots but they were a bit large. I wanted this to be a really easy project so I used the biggest googly eyes I could find.

I used a large knife to make a hole for the nose and the twigs but other than that there was no cutting. I used the stalk of the bottom pumpkin to put the two parts together and it seems secure but you might need a skewer. I used superglue to attach the bottle caps and a foam mouth. I think he would look more realistic if you could find a less round pumpkin for his head, or place the pumpkin on its side. The girls were very pleased and want to cuddle him.

Here are some of our other pumpkin creations from previous years: 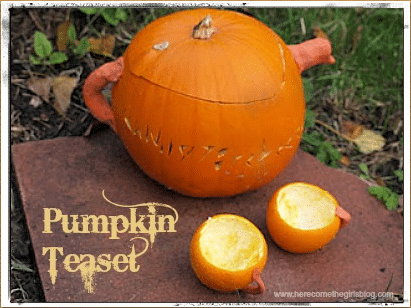