I’ve been working up to making a rainbow cake for the last six months or so. Gradually the cakes I’ve made have got more and more colours and layers. When Molly said she wanted a magician party I knew exactly what had to go in the middle – what can be more magical than cutting a cake open to find bright rainbow colours?

I couldn’t find a really easy recipe for rainbow cake so had to create one using my recipe for an angel cake. As long as you have a lot of pans it’s actually an easy cake to make, honest. I iced it to look like a magician’s hat but really it would be great with a plain icing, it even looks good on its own.

Mix the flour and baking powder together. Sift into the butter sugar and eggs.

Put into separate bowls and add the food colouring.

This is the magical part.

I was making our cake into a magician’s hat so the red is in a slightly bigger cake tin than the others. This is because it formed the brim of the hat.

Once the cake has cooled, ice using butter icing. I left off the red layer as this needed to be covered with fondant icing first. 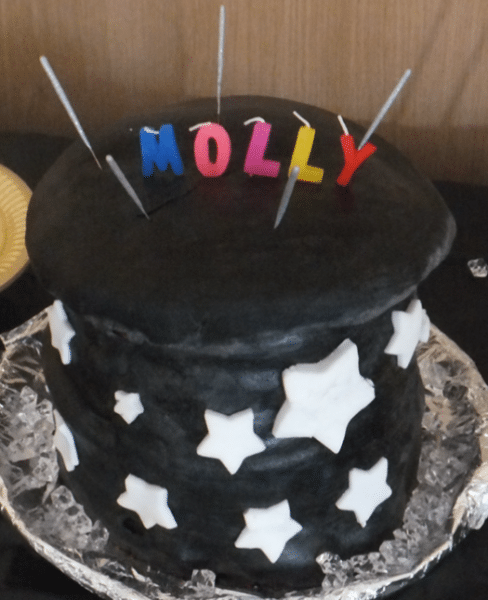 I covered the cake with fondant icing. Then used a brush to paint it with black food colouring, I did originally try to mix the food colouring into the icing but just made a mess and the icing turned more grey than black. To decorate the brim I covered the red layer with fondant icing, added a layer of butter icing and placed it carefully on top. It was not much bigger than the other layers and so they supported its weight – phew!

it cut some stars with a cookie cutter out of the remaining fondant icing and stuck them on the side. 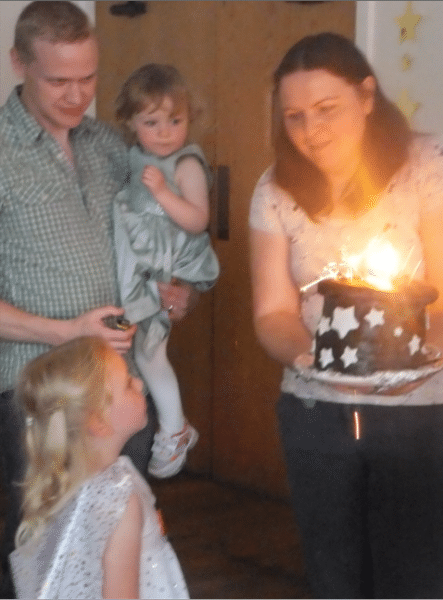 Into the top of the cake, we had some birthday candles and some indoor sparklers. The sparklers were a bit disappointing because they took ages to light – a bit of an anticlimax.

It’s a bit scary to hold a magic cake too!

After you’ve made the cake you’re left with some very pretty rainbow coloured washing up!

After all that hard work look what a lovely treat you have at the end of it.