As huge Disney on Ice fans, we were really excited to be asked to meet up with some of the Disney on Ice dancers in a fun dance lesson in Birmingham the other day. We have been having fun looking at the new Fit to Dance ideas in the Disney on Ice website. If you love the shows, then this gives lots of ways you can be inspired and dance like the ice skaters at home.

The girls loved learning how to put their own dance together. After a fun warm-up, they got started. First they planned their ideas, choosing a character each. Rose was a little mouse, Charlotte was Marshmallow and Molly was Olaf. They made actions for their characters and then put on costumes.

This was the fun part, as they put on accessories and face paint to really get into character. There was an array of different items to try on but at home you could just use your dressing up box.

You can see they totally got into character. It was a really good idea to use characters they already knew as they could act them out really easily. 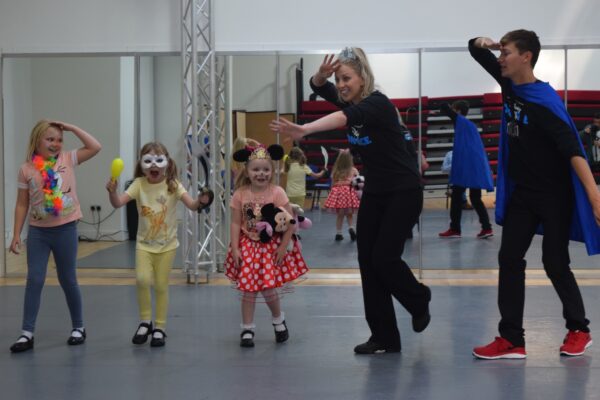 As well as improvising their own dance they also learn a little routine. They practiced this a few times and then put the whole thing together to make a dance sequence.

They used the music from Frozen for their dance. This was good as the girls knew it really well and even sang along.

This would be a great activity for a wet Sunday when you can’t get out the house. You don’t need any equipment, and it would keep the children occupied for ages.

Finally there was a red carpet moment as they stopped for photos. As you can see they had an absolute blast!

If you are looking for a fun way to get your children to exercise at home or at school then definitely check out the website as there are loads of ideas for how to get started.

The new show from Disney On Ice,  Worlds of Enchantment starts touring this Friday until the new year at the following venues.