Yesterday we went to see Erth’s Dinosaur Zoo at the Town Hall Birmingham.It is a great show for dinosaur mad children and a little bit different from the usual show for kids. The stage is simple but effective. Just a very large screen, some billowing smoke, some bundles of hay and prehistoric-looking trees.

The show itself is presented like an animal show. We have been to a few of these where different animals are brought out and the children get to touch and hold them. The familiar scenario makes it seem more realistic when the dinosaurs come out than if it was a story where you know it isn’t real. The dinosaurs themselves are incredibly realistic puppets brought to life by skilled puppeteers. Each of the dinosaurs comes on one at a time so you can learn a few facts about them. These are presented in a fun way by the dinosaur handler who manages to convey a real feeling of danger and excitement.

Struggling to control the T-Rex

Several children are brought onto the stage, as well as a couple of less enthusiastic mums and dads. The children are all very brave and seem to delight in having their head in a T-Rex. One was even keen to jump right into its open mouth. Having the children on stage made it seem even more believable, especially as the dinosaur handlers had a rather cavalier attitude to the children’s safety. The stalls are classed as the danger zone and no one is safe to go on stage. There are also prehistoric insects which fly around the audience and can land on your head or outstretched hand. It is a really interactive theatre experience.

After the show, which lasts just under an hour, there is the opportunity to get a little closer to the dinosaurs. Although the show itself is brilliant, this is the best part.

It’s pretty scary having a dinosaur roaring over you head, but they seem to like getting tickled under their chin.

The baby dinosaurs were a big highlight. You could meet them after the show in the foyer and give them a big cuddle. If you are lucky you can even get a kiss from a Triceratops. 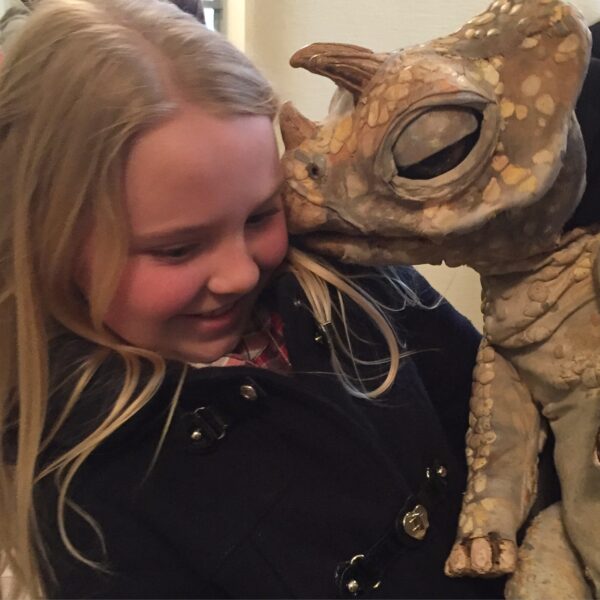 This is a fun family show and the perfect treat for Half Term. It is suitable for children over 3, although particularly sensitive children might find it a bit too realistic. You can still see Dinosaur Zoo at the Town Hall Birmingham, today or at select venues around the country.

Disclaimer: We were given tickets for the show for the purposes of this review

Winnie and Wibur at The Rep Theatre Birmingham

Winnie and Wibur at The Rep Theatre Birmingham

Octopus Hideout at The Sealife Centre

Octopus Hideout at The Sealife Centre

A review of The Snowman at The Birmingham Rep Theatre

What the Ladybird Heard Theatre Show

What the Ladybird Heard Theatre Show

The Highs and Lows of Travelling with Kids

The Highs and Lows of Travelling with Kids