The girls favourite toy at the moment is, without doubt, the Num Noms. They love the friendly collectable characters. They were delighted to be sent a pack of Series 2 Num Noms and challenged to bake something based on their favourite figures. They also love to watch the Bake Off so this was the perfect challenge for us. 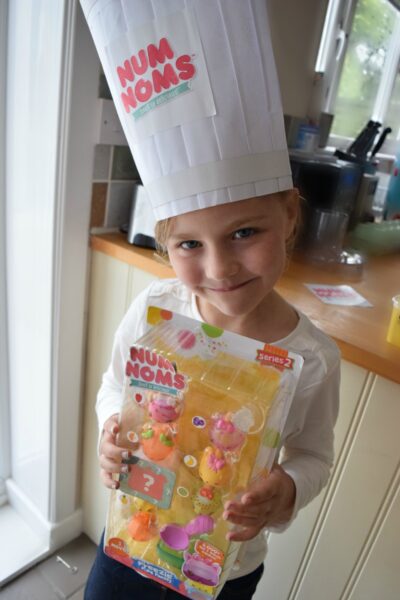 All the Num Noms lined up and the girls chose their favourite one. They loved the orange one OJ Pop the best and we thought this would make a tasty cake.

We made an orange cake using a muffin tray. This makes perfect Num Nom shapes.

We simply baked for 15 minutes in a medium oven until the cakes were golden brown.

For the decoration, we made a glaze using icing sugar, milk and butter. We mixed it together until it formed a thick runny mixture then added orange essence and orange food colouring. Then we cut little ears out of one of the cakes and put them on top as well as some green spots. We mixed black food colouring into the icing and I piped on the face.

The finished Num Noms look really cute and taste really fresh. The girls loved the zesty orange flavour. They would be lovely at a Num Noms themed birthday party. You could make them in lots of different colours with different decorations for each Num Nom.

Why not create your own wacky recipes inspired by one of the hundreds of Num Noms flavours, you can see them all here: http://www.numnoms.com/en-us/collect

You can find our other reviews of the Num Noms here:

Pizza Party with the Num Noms

Top Toys from Frozen 2 Into the Unknown

Frozen 2 Into the Unknown Toys from Jakks Pacific