We were all really excited to go and see The Snowman at the Birmingham Rep Theatre. I was a little worried we would find it a bit Christmassy though, as it was January. I love Christmas but by January I have definitely moved on. Luckily The Snowman is a magical feast which leaves you feeling warm and tingly. It is the perfect antidote to the January blues. 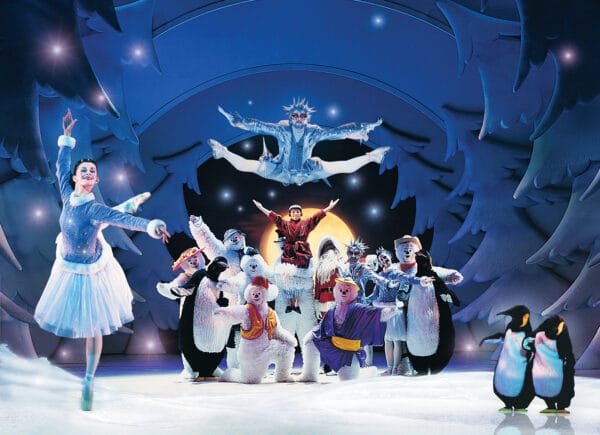 The first thing I loved about the show was the set. The whole thing looks like it takes place in a snow globe. The set is concentric circles with pine trees on either side and twinkly lights in the background. This simple backdrop is used really effectively to show different places in the story. I loved how the house is presented at the beginning, on two floors, with the trees on either side. In the middle is a whimsical scene where the Snowman weaves in and out of the trees on a motorbike.

The story is told through music and movement, much like the book and film there are no words. This works because of the fantastic performances from the cast. The boy was so expressive throughout. His dance as he steps out into the snow really captures the wonder of childhood as you take your first steps outside. The Snowman is delightful and cuddly. The girls wanted to hug him. He looks so friendly and fun and just like the book brought to life. The staging is really clever as the boy builds the different snowballs and turns them into a snowman. The moment where he moves for the first time is so exciting as is the best moment of the show when they start to fly to Walking in the Air. There was an audible gasp of excitement from the audience.

Although the story broadly follows the picture book there are some extra elements which really add to the show and bring something new. We loved the funny dance of the fruit, who appear from out of a large fridge and do a limbo. There are charming animals, each with their own distinct character, the cat, penguins and reindeer are particularly memorable. Their costumes make them look like they have jumped straight out of the picture book. The second part of the show features Jack Frost trying to ruin everyone’s fun. 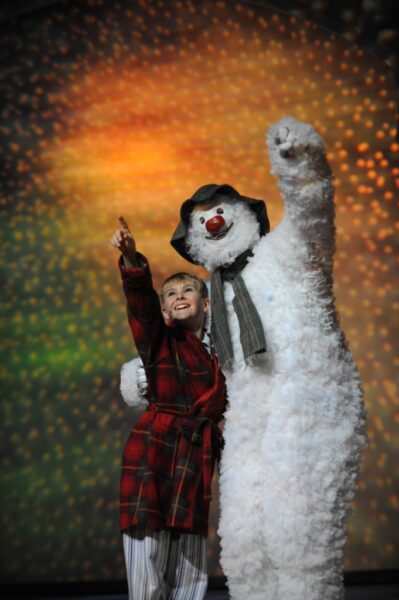 This show is a real treat to get you through the harsh Winter months. Whimsical and charming, it delights with a story of fun and friendship perfect for the whole family. The book and the film leave you feeling sad but the theatre show does not, this is because the finale is a fun song where the boy dreams about his new friends and you are left with a song in your heart and a sprinkle of snow on your jacket.

The Snowman is on until the 15th January

Disclaimer: We were given a family ticket to the performance for the purposes of this review.

PLACES TO VISIT WITH FAMILY IN UK

PLACES TO VISIT WITH FAMILY IN UK

What’s On In 2020 At Warner Bros. Studio Tour London

What’s On In 2020 At Warner Bros. Studio Tour London

A Review of the Jump In Trampoline Park in Warwick

How to Avoid Traffic In Los Angeles

How to Avoid Traffic In Los Angeles

The Top 5 Regions in Italy to Take Children

The Top 5 Regions in Italy to Take Children

3 Tips When Traveling Abroad With Kids

3 Tips When Traveling Abroad With Kids