101 Dalmations at The Birmingham Rep

I fell in love with 101 Dalmatians at the Birmingham Rep during the first five minutes of the show. The opening scene is an absolute delight. It is charming and witty with a procession of adorable dogs, and a love story which this totally sets the mood for the rest of the show. If you are looking for a magical Christmas treat then this show is it!

I took my 7-year-old dog lover Charlotte and she was delighted with how the foyer was transformed. She kept finding Dalmatian puppies everywhere. Even the Christmas tree had spots!

I love the book 101 Dalmatians by Dodie Smith and the Disney film and wasn’t sure how well it would translate to stage. My main concern was how on earth they would get 101 dogs, as well as all the other animals in the story, onto the stage. I shouldn’t have worried, the story was transformed into something altogether new and magical in this performance.

The puppetry is really wonderful and beyond anything, I had ever seen before.  Each puppet was beautifully created and brought to life by the puppeteer. The characterisation of the animals is so detailed and each one moves completely differently, with tiny realistic gestures. You forget they are not real dogs. They are so close you just want to stroke them. 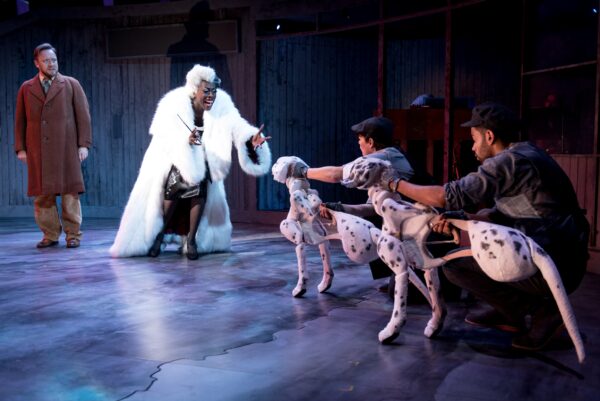 So much of this play hinges on Cruella Da Ville and she is spectacularly terrifying dahling! Gloria Onitiri strikes a delicate balance of being a larger than life cartoon villain whilst also being genuinely scary. She is also so glamorous. It is easy to see why Anita would crave her approval and why everyone helps her with her dastardly plan.

AS the play goes on Cruella becomes more and more unhinged and totally obsessed with getting the puppies and making her coat. As she starts to totally lose her grip she also appears more terrifying. This play is suitable for children age 5+ but I would be careful if they have a particularly sensitive disposition. There is no blood but Cruella does kick a dog and poke her cat with her cigarette and talks constantly about hurting the animals. There is one very violent song, which Charlotte worried about afterwards, although it didn’t spoil her enjoyment of the show as she gave it a solid 100 out of 10!

The staging of this show is so clever and inventive. I even loved watching how masterfully they changed the set for new scenes. Little details add humour to the story. Cruella appears in a puff of smoke and her car is complete with fluffy dice, black and white of course. I loved the atmospheric music in the play, which added drama and pathos. I would have loved a catchy song to tie everything together. Cruella was an incredible singer and put so much passion into the performance and she needed a song with a memorable hook that the audience was still singing as they left the theatre. Although perhaps it was fitting that the dogs got the best songs. 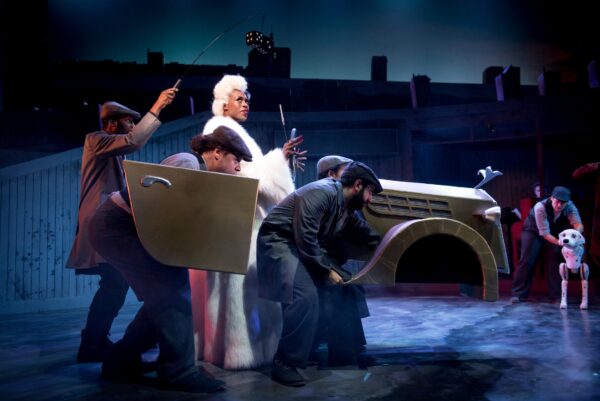 One of the highlights for me was the performance of The Badun brothers. Their dancing and physical comedy were extraordinary. They also had a habit of appearing in the audience looking for the puppies. Charlotte found it hilarious when they held up a penguin Beanie Boo belonging to a child in the audience and asked if it was a puppy. I have never seen her laugh so much in her life. 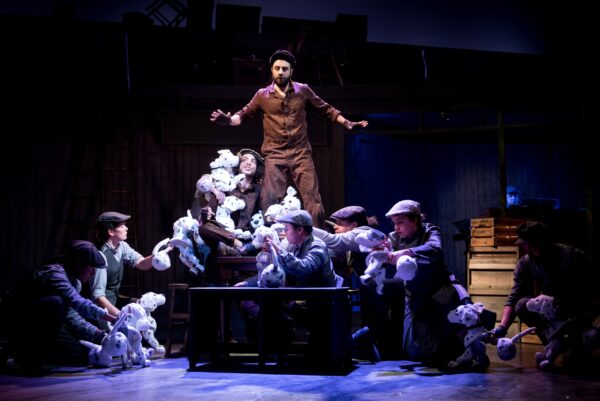 This story had so much heart. I didn’t expect to be so moved but there was something genuinely heartbreaking about a chorus of dogs singing about the loss of their puppies. I didn’t know a tiny chihuahua singing its heart out in a blizzard would be so affecting. I wasn’t expecting to come away feeling Chritsmassy, but the ending is a joyous celebration of Christmas and family. In the end, it was a magical tale of what is important in life. Go and see it!

How awesome are these 101 Dalmatian sweeties? They even have little puppies on them.

Disclaimer: We were given the tickets for the purposes of this review.