Blog Idol – The making of a blogaholic

I’ve been meaning to write this post for a while but other things kept getting in the way. I was thinking about blogging and how it has taken over my evenings and I thought wouldn’t it be nice to say something about the person who got me into blogging, to thank her for the neglected husband, children and housework and all the pounds I’ve been piling on while sitting at a computer screen instead of jumping on the treadmill. So Blog Idol was born.
My blogging story started about 8 months ago. I had signed up to twitter when I got my android phone and started following a few celebrities, as you do. Other than Stephen Fry I soon realised I was less than interested in reading what famous people had for breakfast and was getting pretty bored with it. The only thing I really ever looked at was Netmums. Whenever their tweets popped up there was usually an interesting article on parenting which I would enjoy reading.
Sometime in July a netmums retweet came up from a Katetakes5, I thought it was a bit of a funny name, but hey. She was advertising a competition to win an ipad if you linked up a blog to their new blogging network. It sounded good. I had been doing a bit of writing around then and sending random things to the Guardian which they were (quite rudely I thought). It didn’t take much to jiggle what I had written around and publish it as my first post. I played around with the layout and gave the blog the title Here come the Girls because that is what I had on my photo albums when the twins were born.
In the first few weeks I subscribed to Katetakes5, followed her on twitter and on the netmums bloggers forum and soon found out a bit more about how to blog. Her blog posts are humorous and pithy and always entertaining to read. They were searingly honest about the joys and pitfalls of parenting. If you haven’t read them then this is a great one about lying mums, and also having fancy aspirations Her listography link up is good fun and has a great community of bloggers who comment on each others posts.

So did I ever get that ipad?
Before the half term holidays the listography topic was top 5 mugs. It got an amazing and slightly surprising response. I sent a message saying I couldn’t join in because I am so clumsy we have no nice mugs left. I break something at least once a week (still waiting for this week’s breakage). I had written a post about my favourite mug ever. It really was lovely and as it has the name of one of the twins on it was really special. So of course I broke it. It made me realise I can’t have nice things. This sob story must have affected Kate in some deep part of her soul because a couple of days later – what should arrive but a replacement mug. 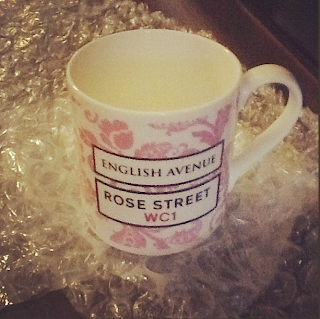 Ok it’s not an ipad, but I guess unknowingly Kate gave me something else as well as a lovely vessel with which to drink my tea. With one little tweet she showed me the way into this wonderful world of blogging, this magical land of self expression. In doing so she may have created a blogging monster but I’m a happy blogging monster. So if you want to write about your blog idol then you can have this lovely shiny sparkly badge. I know, it’s pretty isn’t it. If you want to link it up here then do, I’ll keep this linky open for a couple of weeks.