I love making reward charts for the girls. It’s nice to have something personalised with exactly what they want. I usually make them each a chart but I have noticed they have started to get a bit grumpy with each other recently. I want them to think of themselves as a team so they support each other. I always say we are TEAM ENGLISH!

I found collaborative reward charts always worked well in the classroom. There is something great about working together  to achieve something. At school we would have Golden Time where they could, within reason, choose what to do during  a fun time at the end of the week. The best one I ever did was to have a pizza panama party. We all wore pyjamas and ordered pizza for everyone from the local take away. It was awesome! 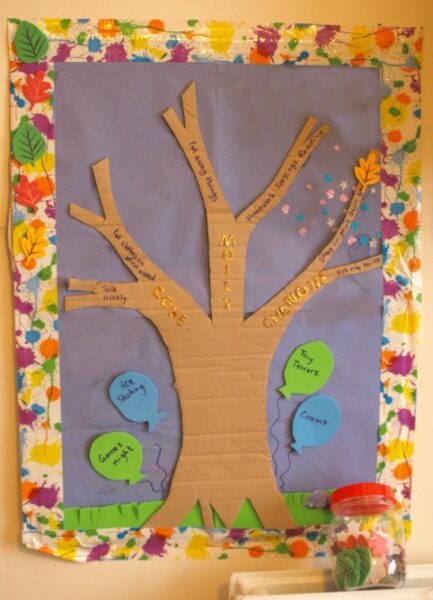 We had bought a set of leaf stickers and I thought it would be nice to use them in the reward chart. We made a big tree picture using old pieces of card for the tree and some spare bits of paper. I put a boarder onto the picture using some colourful duct tape – which has the added advantage that you can stick it to the wall as well. The tree has three branches one for each child. We stuck their names on each branch – which was a good bit of name recognition as well. Although I’m just going to give them stickers whenever I have also written a couple of their targets on the branches of the tree as an extra reminder. Things like going to bed nicely and putting their things away. Then in balloons I’ve put what we might do if they get enough leaves – going to the cinema or soft play. 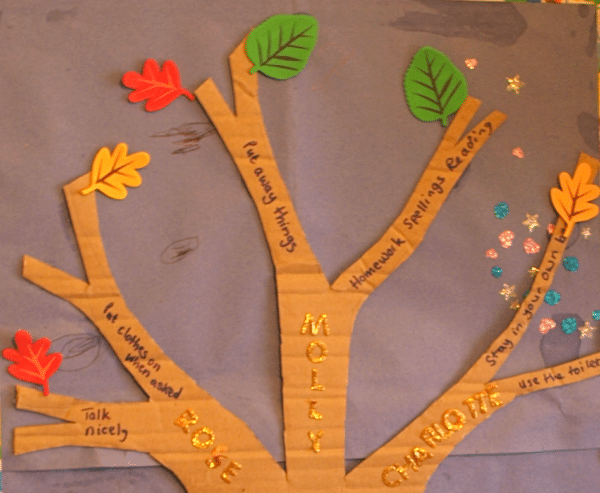 I like this because it is really quick and easy to stick a leaf on and it creates a picture at the end. I’m starting to think the adults could do with their own branch – or maybe we would be the trunk and roots. My target would definitely be to go to bed earlier! 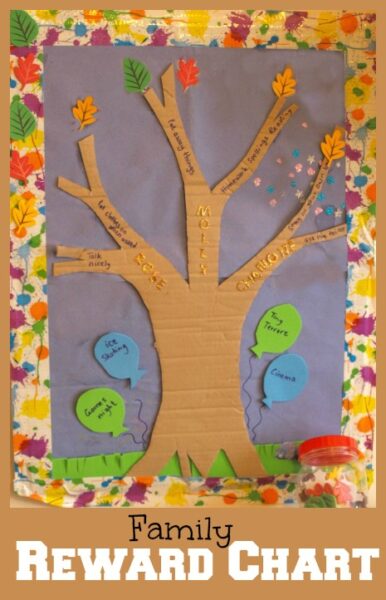 For more leaf crafts there is a great rund up at RedTedArt. You can see them discussed by myself and some other lovely craft bloggers in the Hangout below.

A couple of years ago I made a pumpkin cookie stack after watching the Great British Bake Off. I dug the recipe out today as… 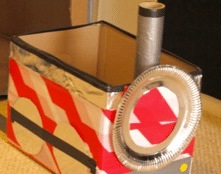 Do you have any spare ones living around? This cardboard box train and tunnel is so eh to make but has kept the girls entertained for a whole week and more. We’ve been looking for ways to reuse single-use plastic. We collected a lot of sheets of clear plastic from packaging and some lids from drinks…

Children in the UK don’t generally give their friends gifts for Valentine’s Day. Last year the twins were obsessed with slime and they wanted to…