On the last day of the holidays I asked the girls to dress up as their favourite Disney Princess as I had a little surprise for them. They were pretty happy thinking I was going to let them eat the last of the Halloween stash (haha! Little did they know that had been polished off before they had even fallen asleep on Halloween night).

When I told them they were going to see Disney on Ice they were rather happy as you can see.

The girls are in the Princess stage. So as soon as I said Princess they were excited. But they also love ice skating – so it is just our perfect combination. Skating is one of my favourite things and I have taken the girls since their feet were big enough, although i can’t take the twins as often as I’d like. Ok I have to admit I may have been a bit more excited than all three girls put together. I LOVE ice skating! 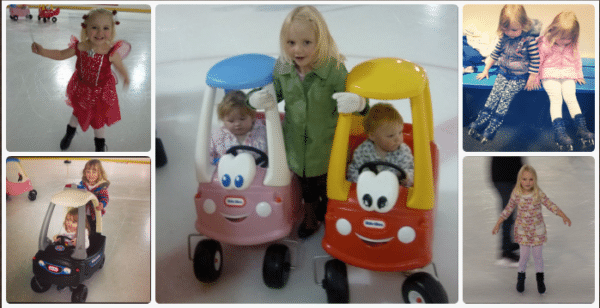 We actually arrived really early for Disney on Ice. Not like me at all. But I remembered that one year I went  to the wrong venue and nearly misused it. Disney on ice is held at the NIA and the NEC in Birmingham. I took Molly a  couple of times when she was little and the last one I forgot to check which one it was at until we were half way there. I am not making that mistake again. Probably.

The twins wanted to go and sit down straight away even though we were so early. We had a great view of the whole auditorium.

The show didn’t disappoint. It starts with the twin’s favourite character Minnie and Mickie so they were delighted. The sets are magical and I can’t work out how they change them to show different scenes. The Disney on Ice: Dare to Dream show features The Princess and the Frog, Cinderella, Snow White and Tangled. It is incredibly girly with wonderful costumes and lots of twinkling lights. The show is really long, with a short intermission in the middle but to be honest it wasn’t a problem at all for my girls – they were completely spellbound. The twins are 3 but even for them it wasn’t long enough.

For me the main thing is the ice skating. The skaters are really amazing. They spin and twirl so gracefully. The fact they are skating adds a lyricism to the stories and somehow makes them more touching. I have watched the films of these stories countless times but it is just so lovely seeing them told on ice. It might have brought a bit of a lump to my throat.

Without doubt my favourite part, and the girls too, was the Rapunzel story. The dancing in this part is breathtaking. It is so inventive how they show Rapunzel’s incredibly long hair and the love story is very movingly told. I was really pleased that my favourite Tangled song Mother Knows Best was included. The ice skating horse was incredible. The ending with the lanterns was so moving. I could have watched them dancing all day.

There is a lot of merchandise on offer and it is hard to avoid. Luckily with Christmas coming up I got the girls to choose one thing that they all wanted so we would ask father christmas for it – sneaky huh!  It is definitely worth coming to an arrangement beforehand so the day isn’t ruined by pestering. Also the queues are quite long so if you want to buy the snow cones or candy floss then it’s netter to get it from the vendors who are walking around with them, although you will need cash for that. 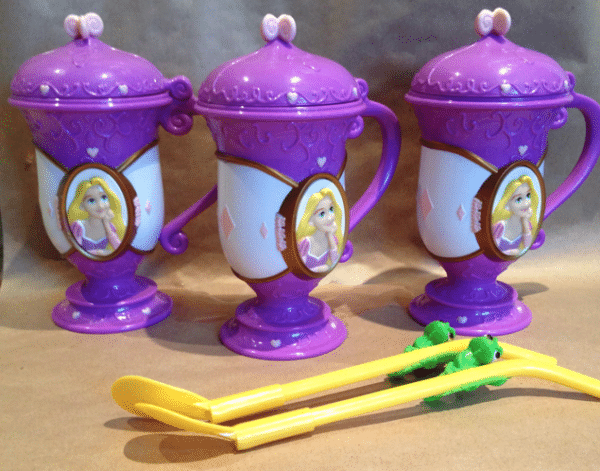 We did buy them all a snow cone as that comes with a Rapunzel cup. It was a bit hard for the twins to drink, although Molly polished it off pretty quickly. On reflection probably not the best choice when you have a stadium full of little girls all wanting to use the bathrooms at the same time. My top tip is to get there quickly in the interval so you don’t have a long queue.

It was a big success. On the way home I asked the girls for their verdict. They all had lots of favourite parts: Cinderella’s carriage, the mice, seeing all the different princesses, the pretty dresses, the skating – there were too many to list. This was how they summed it up:

You can still see the show as it is on tour in the UK . Tickets start at just £13.50 plus booking fees. You can pay that for the cinema in some places! It is a great family day out. To find out more details see The Disney on Ice website.

Or catch the next one Disney on Ice: Worlds of Fantasy which features Toy Story, Cars, the Little Mermaid and Tinkerbell. From the 5th March in the UK.

Disclaimer: We were sent tickets to see the show for the purposes of this review.

Hatchimals Review – See our hatchimal unboxing and hatching vidoes and read a review of this must-have toy.

A review of Seedlets gardening tools.

Meet the Lumo Stars. A review of the new plush toy.

A review of the Octonauts Training Academy at the Sealife Centre Birmingham – a fun day out for the family.