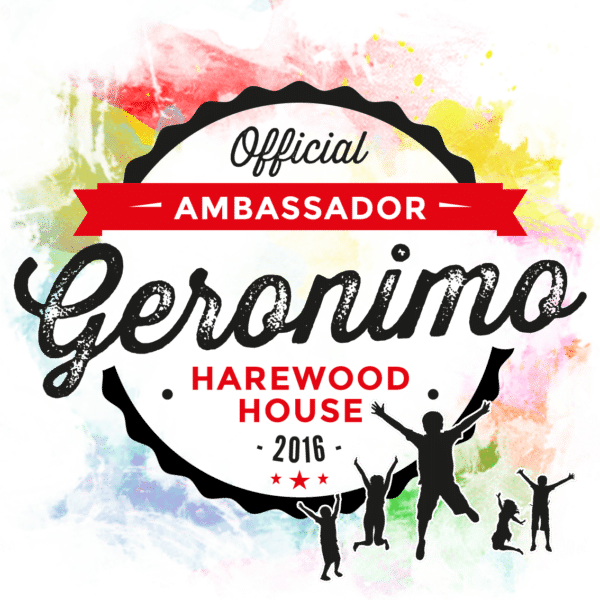 W are really excited to be ambassadors for the Geronimo festival in 2016. For a while, we have wanted to go to a family festival and now we finally get the chance. I think it is fantastic that there are family events, like geronimo, which give you the feel of a festival but are suitable for all the family. The line-up for next year look lots of fun with a few of the girls’ favourites included.

Following a hugely successful first festival in 2015, Geronimo is proud to announce it is not only returning to Tatton Park in Cheshire for a second year in 2016, but it also has a new second home at Harewood House, just outside Leeds.

Taking place over the weekends of 1 – 2 May (Harewood House) and 29 – 30 May (Tatton Park), Geronimo is back, bigger and better with a huge programme of events lined up for both venues.

Set against the wonderful woodland backdrops of two of England’s premier visitor attractions, Geronimo will yet again be delivering an exciting array of acts, amazing experiences and wonderful adventures, including lots of new attractions – all resulting in a fantastic family day out.

Festival Director, Simon Goldman said: “After the huge success of Geronimo at Tatton Park in 2015, we decided to look for another venue to give even more families the chance to enjoy the Geronimo experience. As a father of seven, I know how hard it is to find quality days out that cater for the whole family.  With Geronimo, we’ve created a festival that’s going to keep the kids entertained all day long, and create memories that will last a lot longer.

“Expect a lineup jam-packed with some of the biggest names in children’s entertainment, a brand new theatre and literary zone with award-winning productions and a second stage featuring live music.  And there are hundreds of other crazy and unusual activities like giant Tortoise encounters, stone carving and a crime scene for kids to solve.  This really is the chance to tick off some of your 50 things to do before you’re 11 and three quarters!”

The return of Mr Bloom to the Geronostage Zone!  Geronimites can ‘pop along’ and say ‘Ello!’ with Mr Bloom, where there’ll be a bundle of veggie stories, gardening games, and catchy nursery songs for tiddlers and parents alike. Alex Winters from Cbeebies will be hosting the main stage each day. Join Cook and Line from Swashbuckle in a rip-roaring pirate adventure! Full of fun songs and silly slapstick comedy, this energetic and interactive performance will be loved by children of all ages.

Geronimo festival has also added CBeebies’ favourite, Andy Day, to its 2016 line up. Our favourite explorer will be performing his Dino Rap show, which promises to be filled with tales of his adventures to faraway lands and distant rainforests. Andy has presented various shows and on-screen presentations since 2007, including Get Set Go and Big Fun Time with co-presenter Sidney Sloane. Andy has fronted his own Bafta nominated 40 episode series for Andy’s Wild Adventures, as well as the follow-up series of 20 episodes, Andy’s Dinosaur Adventures and has just completed filming the new 25 part series Andy’s Prehistoric Adventures, which will be shown in 2016. 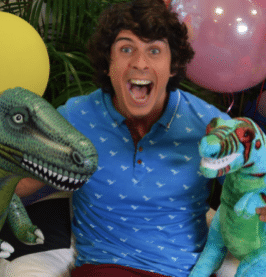 The Adrenaline Zone will challenge even the bravest adventurers with tree climbing, den making and a thrilling zip line that will reach speeds of up to 60KPH! For those who like things a little less fast paced, there are fencing and archery taster lessons and Parkour sessions where Geronimites can learn how to jump and roll like a Pro.

New for 2016 is the Arena Zone, an extravaganza of live displays featuring motorbike display teams, sheepdog shows with a difference (we haven’t got any sheep so we had to use geese instead!) and owls in the falconry show – on horseback (what else would you expect at Geronimo?). For history fans, watch the Knights of the Royal Order as they carry out a live joust, or check out a local band of cowboys showing off their horse handling skills.

If you thought the Library Zone sounded dull then think again! Join some dance classes to learn Bollywood or Zumba moves or enjoy a gigantic drumming session – beware, it’s going to be noisy! For fans of Frozen, there will be a Frozen singalong and the talented Mr Yipadees show will be bringing instruments to life.

Catch award winning theatre productions in The Theatre Zone, with Pocket Story Theatre – winner of the primary times children’s choice awards at the Edinburgh Fringe. Fabularium is the most eccentric of travelling shows and Les Enfants Terrible present the Imaginary Menagerie— travel with Dr Longitude as he regales you with his strange stories and takes about his travels.

Gasp in awe at the breathtaking aerial trapeze show, try your hand at plate spinning, or hop onto stilts in the Circus Zone. This zone also includes a full circus show and Circus fudge will also be performing his show from Glastonbury festival – don’t miss it!

Enjoy a hands-on wildlife experience in The Pasture Zone where kids of all ages can climb aboard for a ride on one of the donkeys or Shetland ponies. Crocodile Joe will be hosting his amazing reptile show and new for this year, there will be the largest collection of giant Tortoises coming to Geronimo.

In the 3ft and Under Zone, little ones can join a fun class with Tumble Tots, take a ride on a balance bike or take a dance lesson with baby ballet. For the tiny tots, simply chill out in the baby yoga tent.

Fans of live music are in for a treat at the Bandstand Zone with popular acts on throughout the day.   The lineup will be announced shortly.

Creative kids can join in the many craft workshops in the Funky Junk Zone.  From amazing woodwork workshops, hair braiding, face painting and fairy making workshops, to stone carving and totem pole making, there is something for everyone to get stuck in to.

Or why not enjoy some old fashioned fun in the Fairground Zone? With an old fashioned Helter Skelter, traditional carousel and steam powered swing chairs for kids and grown-ups who are still kids at heart!

And where better to have some fun than in the beautiful woodlands of Tatton Park and Harewood House? Transformed into the Woodland Zone, Geronimites can make a mud pie or fairy potion, learn to create a whistle from a carrot or build a den. Older kids can monkey around in the trees in a mobile high ropes course or strap on a helmet and ride the mountain bike course.

Tickets are on sale from Saturday November 7 priced from £18.50pp.  A ticket for Geronimo Harewood also includes access to Below Stairs of the House.

See geronimofest.com for full details and to book tickets.