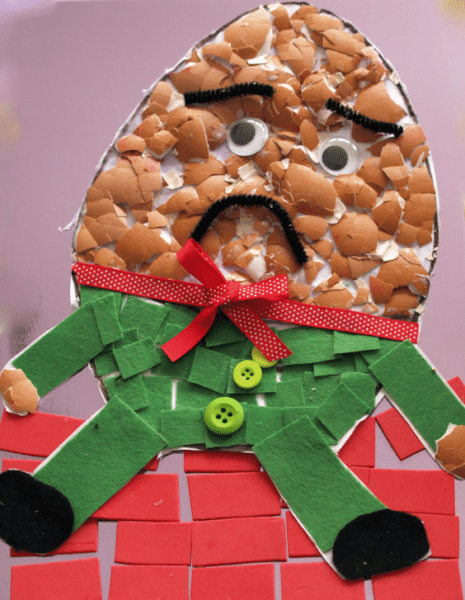 The twins came home from Nursery this week singing Humpty Dumpty. They have been doing lots of nursery rhymes and said this was their favourite and could they make a Humpty Dumpty picture. I was planning on making them scrambled eggs for lunch so kept the egg shells. We gave them a good wash and lay them to dry. I wanted quite big pieces so didn’t cut them too much.

I made a Humpty Dumpty template for them to use. If you want to use it then look here for a free pdf of the egg template. Another time I might just give them the materials and see what they create but this time we wanted an end result.

Rose instantly lost interest in doing this and made her own under the sea collage. Charlotte loved using the gloopy glue and spreading it on the area to work in. I gave her a real paint brush and it made it much easier than with a glue spreader.

After that Charlotte stuck on the pieces of egg shell. They need to be pressed hard so they stay stuck down. Charlotte is nearly four and could do this totally independently now.

Once Humpty Dumpty was covered in shell Charlotte added some googly eyes and pipe cleaners for a mouth and eye brows.

I wanted to use a pink pipe cleaner for the mouth but she preferred a black one and it did look better.

The legs were made with green felt. You could use painted egg shells if you wanted but I liked the different textures. I cut out four rectangles for the arms and legs using the same piece of felt. Charlotte chose all the colours.

The only bit I did was the bow as that was a bit tricky. Charlotte added some buttons and black felt for feet and a small piece of egg shell for the hands.

While she was doing that I cut out the Humpty Dumpty and stuck him onto the card. He looks very unhappy but I suppose that’s what happens if you go around sitting on walls.

Five Currant Buns from My Little 3 and Me

Incy Wincy Play Set from My Little 3 and Me

We took part in a lovely hangout featuring lots of Nursery Rhymes. Watch it here: