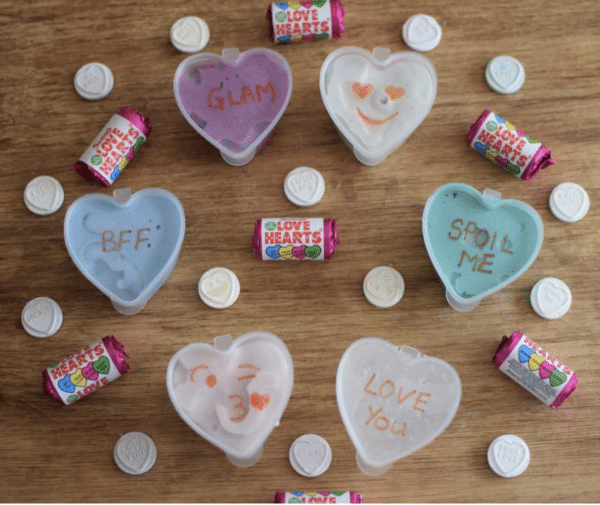 Children in the UK don’t generally give their friends gifts for Valentine’s Day. Last year the twins were obsessed with slime and they wanted to make some for their friends so it seemed like a good opportunity to make some slime with a Love Heart theme.

We made a transparent slime using clear PVA glue –

We don’t follow a recipe when we make slime. We mix the clear glue and a teaspoon of bicarbonate of soda, then add in the contact lens solution until it isn’t too sticky.

Once the slime was mixed we added some food colouring, keeping one batch clear. We used pastel colours to match the colours of the Love Hearts. We used green, pink, blue and purple.

I found some small heart shaped pots on Amazon. They look really cute and the lids are really tight so they don’t leak. We’ve had that problem in the past – not the best when you’re giving a present.

Finally, we wrote some simple messages on the top with a Sharpie. It was a good excuse to eat some Love Hearts to see what messages were on the front.

The same idea would work for Conversation Hearts in the US as well – in fact it’s probably better because they are heart shapes and not a circle with a heart inside like Love Hearts.

The slime turned out really soft and stretchy.

I love how pretty they look with all the different colours, like a pastel rainbow.