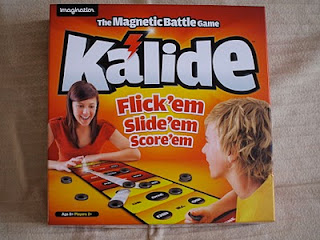 I’m not going to mention the C word yet, don’t worry. However, we all know it’s there, looming in the background. After this warm spell the days will get colder and the nights will start to draw in. Already the decorations are starting to go up in the shops. Its ridiculously early, but if you’re on a tight budget you do have to start getting presents. If you’re looking for a good fun, family game then kalide may just be it. This is an action game which will appeal to children who don’t want lots of rules, but just want to have fun. 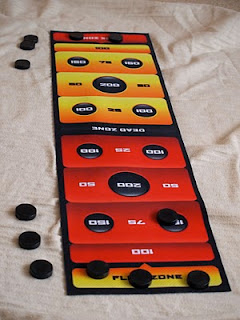 The aim of the game is to flick or push your magnetic puck across the board to get the highest score. So as well as the usual social skills you gain from playing a game, such as turn taking, being a good winner or loser, and cooperation – you also get a sneaky bit of maths practice. As my daughter is slightly younger than the recommended age of 8 for this game, we just played it to get the pucks into a circle on the other side.

The only thing I didn’t like about the game was the amount of packaging, I know it needs to sit on the shelves and so be the same size as the others, however there was a lot of box. There aren’t many parts to this game – which to me is a plus point because there is less to go missing. However, when you open the box, it is all very dark and looks a bit disappointing. When you unroll the game board then it looks more exciting. 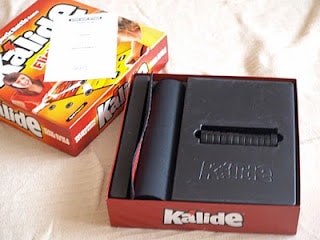 It was fun and fast and especially good when you knock your opponent off the board. The magnets are also fascinating, and we got in a discussion about how they repel and attract each other. As there are only two players and is not very complicated it would be good for children to play on their own.

To see a list of stockists go to Imagination Games.