There’s only one thing on my Christmas list and that is more time. I just need a few more hours a day to get everything done but also do a few of the things I really love. Weekends seem to flash by and once I have done a few chores there is no time left for fun. My least favourite weekend job is doing the ironing. There is so much of it and it takes so long. I would much rather spend the time doing something I enjoy, like crafts with the girls. 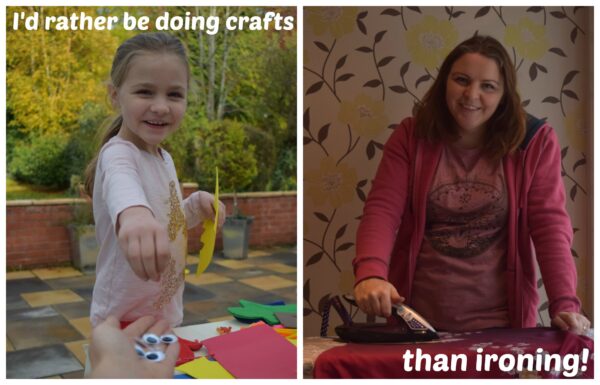 This year my Christmas wish has come early as I was sent a Philips PerfectCare Elite Steam Generator Iron to try. I have never used a steam iron before but have always wanted to see if they really do save time. The claim is that you can “enjoy Less ironing and more time on your hands with the Philips PerfectCare Elite range, the world’s fastest, most powerful steam generator irons on the market”.* Even an extra ten minutes off my least favourite job would be a bonus.

My Review of the Philips PerfectCare Elite Steam Generator Iron

I was so surprised when I opened the Philips Perfectcare Iron. It looks so different from an old-fashioned iron. It is a really sleek purple, silver and black and very shiny. You will need a larger place to store the iron as it is much bigger but it is very compact and the wires all roll up so it can be tucked away with ease.

The unit is much bigger but surprisingly light and easy to carry with a special handle. The biggest change is that instead of putting the water in the iron you put it into the steam generator. This is really easy to do as you just clip off the water tank and fill it up. It holds an amazing 1.8l of water. It is easy to clip back into place. You then simply switch the iron on and you are good to go. The iron takes about 2 minutes to heat up. You can tell it is ready because it stops flashing. I found it took around 1 minute 48 to heat up.

The other big change is that there is no stand on the base of the iron. You can simply leave the iron on the side and it will not burn. This is brilliant for me as I always leave the iron for too long on the fabric and scorch it. It is also much safer to leave the iron lying flat than upright as it can’t be knocked over. There are also no settings. You can iron any fabric and it will glide across without needing to change anything. The iron is very light and smooth and it is very easy to use. The manufacturers claim that “with its steam power and consistency the PerfectCare Elite is able to claim the fastest ironing experience”** In my test it cut down time considerably. I would say, it took about 20 minutes less time than normal to get through a load of washing.

The main feature of the Review of the Philips PerfectCare Elite Steam Generator Iron  is the steam. You press the button on the handle and get a burst of steam, perfect for stubborn creases. If you hold down the button then you get a constant supply of steam. This is brilliant for ironing shirts. I did find it took a bit of getting used to as the steam is so hot, you have to keep your hands out of the way and I did feel warm after using the iron for a while. Ironing is definitely not my strong point but I found it much easier to get a crisp finish using this iron. While it was still not my favourite way to spend an afternoon it was really satisfying getting the ironing done in half the time and with a better finish than normal.

You can see my video review here. Big thanks to my 9 year old who did the filming for me.

I’d rather be doing crafts…

So what did I do with all my extra time? Well, my absolute favourite thing to do in the world is to spend the afternoon with my three girls doing crafts, pottering about making things and playing with them, making a big mess with glitter, glue and googly eyes.

We were sent a big craft kit and it was so bright and colourful and tempting, we could wait to get started. Just looking at the rainbow coloured loveliness made me feel happy.

The girls quickly got stuck in making puppets. I didn’t give them any advice but let them use their imaginations to make whatever they wanted.

It was a lovely afternoon so we thre open the conservatory doors and it felt like we were crafting in the garden. This was the monster in their puppet show, he had lots and lots of googly eyes.

Of course, we had to have a Pikachu. Pokemon is the girls favourite thing at the moment so I wasn’t at all surprised they wanted to make one of their favourite characters.

Once the puppets were made then I was treated to a puppet show. I have to admit the show was pretty surreal and there was a lot of giggling but it was great fun for all of us.

You can see what the girls would rather be doing on our video here. Their answers are VERY silly.

What would you do with the gift of time?

This is a sponsored post on behalf of Philips. I received compensation in exchange for my post; however, all opinions stated are my own.