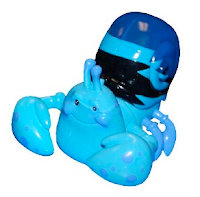 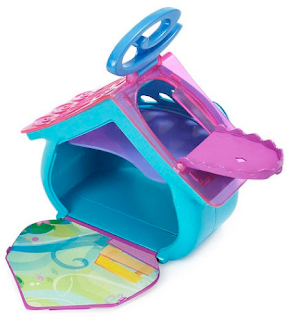 The Xia Xia interactive hermit crabs are a really fun toy aimed at girls aged 5 year olds up. I liked it because although it is marketed at girls it isn’t overly girly. The colours are bright and cheerful and the skittering crab motion is really fun. It is great for children who love collecting micro figures.

The crab we were sent is Tobago, a cheeky faced blue hermit crab. He is an explorer crab and has a micro friend hidden in his shell Globy who is a globe. The Xia Xia crabs move very well. All you have to do is press their claws and off they shoot. They already have a battery in them so are ready to go straight away. The only downside is they don’t work very well on carpet so if you don’t have any wooden or tiled floor you would have to play with them on a table. On a hard surface they speed off brilliantly going in every direction not just forwards.

We were also sent a Confetti Cottage. Like most toys of this sort you do not get any crabs with the cottage, you have to buy these separately. It does say this on the box but I learned the lesson the hard way with a Sylvanian Families house at Christmas. This cottage fits the crab brilliant and has a carry handle so you can take it with you. It would be a great toy to take out for the day. There are lots of little doors to open and shut.
As well as the playsets and crabs you can also buy shells which have two friends in them. All the crabs can wear the hermit crab shells as they are interchangeable from one character to the other.
The price of these toys is really good. It is around ten pounds for the cottage and eight pounds for the crab. Although they are a collection you wouldn’t need to get everything and can have a good game with just one of each. 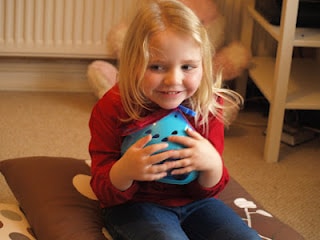 The final word has to go to my daughter. As you can see in this picture she loved the Xia Xia hermit crab and is already planning which she would like next.